Business people of all types can take lessons and inspiration from many places, whether they’re at the helm of small startups, family businesses that have been passed down for generations, or an FTSE 100 listed, blue-chip company. These lessons may come from business books, characters in a TV show, family members, other business people, or even athletes. One group of athletes who can provide valuable learning material is golfers.

The world of golf itself is also big business. The highest prize money award in 2019 was at the Players Championship, with the winner walking away with $2.25 million, with the US Open, Masters, and British Open each close behind with prize money of around $2 million each. Millions of dollars each year are wagered on games through both pre-game moneyline and spread bets and mid-game propositional wagers. Some of the most successful golfers earn serious money, with three players (Tiger Woods, Phil Mickelson and Jordan Spieth) earning more than $40 million per year. 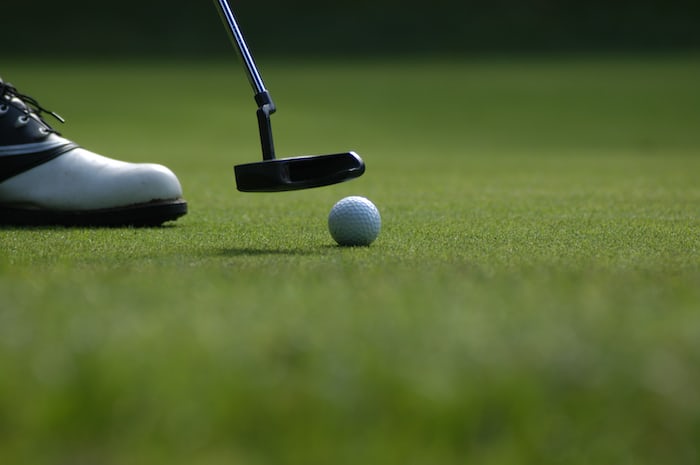 Drive for Show, Putt for Dough

This is a famous saying amongst golfing professionals. Smashing a 300-yard drive down the fairway will certainly attract the attention of your fellow golfers; yet, if it takes you another three or four shots to putt the ball, then your demonstration of brute force will equate to nothing.

This concept applies directly to business, so much so that an equally famous saying exists in the world of business: “turnover is vanity, profit is sanity”. This means that businesses chase turnover for the same reason that golfers like to hit their ball long distances – to show off and attract attention. However, the profit in a business is comparable to the skill of being able to putt the ball; it is the important part that allows the business to pay its bills and its staff. Whilst a business can survive in the short term on cash flow alone, without profit, it will eventually fail.

Play the Course, Not Your Opponent

Many amateur golfers fall into the trap of focusing on beating their opponent. However, any successful golfer will tell you that to win you must focus on the course, playing the ball in a way that takes advantage of the terrain and the direction of the wind.

Business people should also take this approach. Instead of focusing on what their competitors are doing, they should focus on their customers’ needs. After all, the competitors may have selected a failing strategy and copying this would lead to your own demise. For example, if a business has identified a growing trend for environmentally sustainable clothing, copying a competitor who has begun to sell cheap but unsustainable products will cause them to miss out on the opportunity they have identified.

Focus on What’s Next

A golfer who has hit their ball into a sand trap is not going to get the ball out by repeating the same actions that got the ball in there initially. Instead, a good golfer will assess the conditions that they find themselves in, accept reality, and focus on moving forward. This is better than repeating the same mistakes or dwelling on the past, as these will both ultimately cause you bigger problems in the long run.

The same goes for business people. People can get emotionally attached to products, services, decisions or even whole businesses, particularly after they have invested a lot of time and money. However, if the decisions you have made have landed your business in the metaphorical rough, it’s best to focus on how to get out, rather than dwelling on the “sunk costs”. Warren Buffett’s advice is to not “throw good money after bad”, meaning you shouldn’t try to spend more money in the same way after making a bad investment decision, and instead you should cut your losses. Costs are in the past, and therefore they should not affect the way you make decisions in the future.

Business people have a lot that they can learn from golfers. Many of the decisions golfers make are identical to those made by business people; for example, a focus on driving a golf ball hundreds of yards down a fairway can be compared to focusing on growing turnover without consideration given to making profit.