Celebrated wildlife photographer David Yarrow will debut his new show in Antwerp from November 10 – December 4, 2021. Located at Leonhard’s Gallery, Yarrow talks more about the stunning images he’s captured of some of the world’s most captivating species.

The Opening: Featuring a Private Viewing and Book Signing

On opening day, November 10, the exhibit includes a private cocktail hour plus a book signing with David Yarrow. The general exhibit will be shown from Thursday to Saturday until it closes in early December. Known for his innovative approach to photography, which includes numerous predators, his work draws the viewer into another world. His primary goal is to show the wild in a way that helps viewers connect on a deeper level.

Several years ago, this photographer fell in love with both the gallery and the team at Leonhard’s and was thoroughly impressed by the interest and popularity they managed to generate. He expects to see returning faces and new audience members alike.

Standing in Front of the Right Stuff

There are numerous schools of thought when it comes to photography. For Yarrow, it’s all about getting in front of what people want to see. His artistry comes from experimenting with different angles, particularly when it comes to the perspective of how animals are photographed. 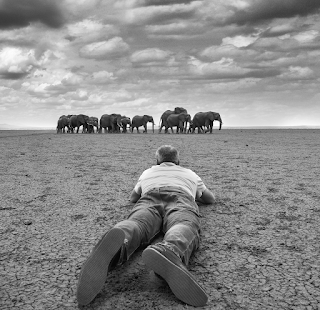 David Yarrow knows that it’s not always easy to balance safety in the wild with the art he creates, but he does work to control the situation to the best of his ability. Yarrow’s books include many of his best photographs taken throughout the course of his career. It’s his pleasure to connect with fans by personalizing the collections with his signature and well wishes at his show in Belgium.

The Medium of Photography

Photographs that tell a story have a way of sticking with people long after they tear their eyes away. This has been a goal of Yarrow’s from early on, and he’s always looking for new ways to forge a bond with his audience, even if he never meets them in person.

Staring into the eyes of a tiger, witnessing a baboon in its natural habitat, or drinking in the majesty of a herd of elephants is a way to tap into our primal nature. It reminds us of the raw beauty of our natural world, which can be a welcome relief in the digital age.

David Yarrow knows first-hand how special it is to be a part of the unspoiled wilderness and he doesn’t take his position for granted. He considers it an obligation to share what he sees in all its glory, so as little as possible is lost between reality and the picture.

A Feast for the Eyes

Fans and contemporaries alike have praised Yarrow’s work for its visual quality, and Leonhard’s Gallery is the perfect backdrop for these impressive photographs. The team is known for arranging each work so it can have the lasting effects that the artists intended for the viewer. The gallery is of the leading representatives for David’s work in the past, and they are proud to continue their relationship with him on this upcoming show.

Leaning heavily on the audience’s emotions, Yarrow finds ways to pay homage to his subjects without turning them into little more than a fantasy. He challenges people to think differently about our world, especially about parts unknown. If people don’t visit places like South Sudan and the Wild West, it would be easy to forget their importance. This show inspires viewers to deepen their feelings about everything from the land to the animals who roam it.

David Yarrow on His Shows

Shows for Yarrow are so much more than a function to further his career. From the opening cocktails to the moment his work is taken down, this is a chance for the beauty of the wild to reach people from all backgrounds.

As we all struggle with our role in protecting the Earth, how we move forward will depend on understanding exactly what we’re trying to save. Photographers of endangered animals are doing more than just snapping candid shots, they’re making it possible to see just how important it is to keep these faces and places from disappearing. David looks forward to welcoming anyone in Antwerp who is ready to see art in its rawest form.