Let me tell you a secret. I have a white Rolls Royce Wraith. It’s white as white can get, and I never, ever wash it. Before I tell you why, I want to tell you a story that involves me, two cement posts, and a shady run-down bar. The story goes back to when I was driving a 1974 Ford Maverick. It was at a time in my life when I wasn’t doing so well, making bad decisions and such. It was also at a time when I was always feeling sorry for myself. The funny thing is, the more you act like a victim, the more the world will validate you as a victim. I was a victim in my own mind as I drove that 1974 Ford Maverick that night.

I pulled up to a bar, but the place was jam packed. Not a single parking space was open. I got pissed. The world couldn’t even provide me a parking spot at the bar. I glanced over and noticed two cement posts over to the side and it appeared that there might be just enough space for me to squeeze in. As if I could put a square peg into a round hole, I decided to give it a try.

I floored it with the idea that if I just went fast enough it would make my car skinnier. I went in and scraped between the two cement posts and tore off my door handles. From that time onward, I had to manually unroll the window to get in and out of my car. That thing had no door handles and no heat. 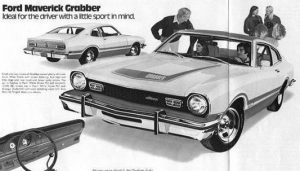 Lake Charles is the pit of Louisiana—it’s hot and humid, but winter is cold because it’s wet down there. You wouldn’t want to be rolling with me back in the day in my 1974 Ford Maverick.

In later years after I got my life together, I remember being so proud when I bought a Toyota Cressida and the payments were $328 a month. I was proud of that car. I was making what seemed like a lot of money at the time and I was rolling in my Cressida—and it had its door handles.

I continued to work hard and I never splurged on a fancy car even though I could have if I chose to. I always tell people, “Pay the price today so you can pay any price tomorrow”. I paid the price. There were long hours traveling from city to city, knocking on doors, pitching to people who didn’t know me so I could get new business.

You don’t need a Ferrari or a Lamborghini unless you have created so much wealth that you can afford to make stupid purchases. Stay with your Maverick or your Cressida and don’t be a pretender spender and act like you are a baller before your time. I leased it this past November because buying a car is dumb. The only thing about this piece of metal that’s an asset is that my ass sits in it—otherwise, it’s not an asset. But it does make me feel good when I open it up and get inside. If the lights on the ceiling remind me to reach for the stars, then the car will be worth it. The ceiling of my Wraith lights up like the stars

My white on white Rolls Wraith, with the little white spirit up front and the starlight roof, is completely unnecessary. I’d say it’s over the top. But in reality, it is a symbol of having done tremendous amounts of actions. Many, many actions got me this car, and I’ll admit it—I like it.

Nobody needs a $400,000 automobile. But the truth is, nobody needs a beat up old Ford Maverick with no heat and no door handles.

It’s ridiculous to have as much money as I have, but it’s also ridiculous to be poor or have just enough money to get by. Which side of ridiculous do you want to be on?

Too many people are out there are feeling sorry for themselves like I did back in the day. They think the world owes them something because they’ve gotten the short end of the stick. The truth is that the universe is going to keep serving you plates of what you resent. If you don’t like the way your oatmeal comes to you, then make your own oatmeal. If you’re resentful, angry, and in protest mode, that isn’t going to pay. That’s focused on yesterday. Each unit comes equipped with an elevator for your car. You don’t have to leave your car until you are inside your apartment 60 floors above the Atlantic. Is it ridiculous to park your Porsche inside a skyscraper?

Your reaction to this idea is how you choose to view the world. Scarcity and waste or affluence and opportunity? I used to see images like this with envy, but now I choose to see them as ways to inspire me to higher levels of possibility. People that tell you money doesn’t grow on trees are wrong. There’s so much money on planet Earth it’s ridiculous.

Now let me get back to my ridiculous Wraith—and why I never wash it. You see, I don’t have time to wash my car, just like I don’t have time to cook, garden, or mow my lawn. I pay others to do my chores so I can focus on bringing revenue to my companies. Stop spending hours of your week on tasks that don’t get you closer to your goals.

You shouldn’t be thinking about how you can save $20 by washing your car yourself, but rather how you can make $200 while someone else washes your car for $20. Pay someone else to do tasks that will free up your most valuable asset—time. My time is worth more than any Rolls-Royce Wraith. How about you? Let me know what you think and share this with your friends.

By the way, speaking of ridiculous, you could be riding with me in my personal jet 10X Airlines later this year. I’m not wasting time going through TSA, and I want to roll with you in my own Gulfstream jet. All you have to do is buy a ticket to the upcoming 10X GrowthCon in Miami this March and you’ll be entered to possibly win.