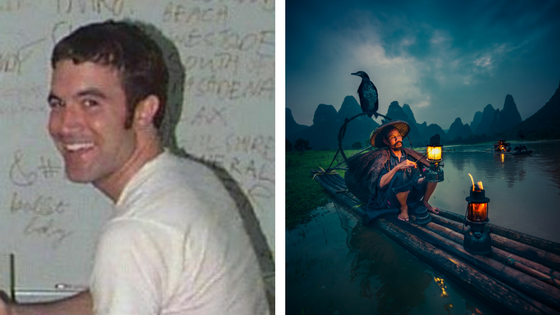 When people talk about Myspace, they tend to remember two things: the often hilarious status updates they shared as teenagers, and the face of Tom, the first friend everyone had on Myspace.

It’s founder, Tom Anderson? Yeah, he retired before the age of 40 as a multi-multi-millionaire.

Now, he’s a world traveler and photographer (follow him on Instagram and Facebook)—and a very talented one, at that. Indonesia, Singapore, Hawaii, China, Scotland and beyond, he takes photos all over the world—and then shares them with his 7 million+ followers across social media platforms like Instagram. He also has a personal blog where he pairs his world travels with his own personal musings.

Basically, he’s living the life every Millennial spends their workdays daydreaming about.

You’ve got to give it to him, at least he doesn’t stay in one place. There are tons of Instagrammers out there who might be living it up, but they rarely leave their familiar surroundings. The same photos of California are only cool for so long.

“My passion for photography is what keeps me traveling. I have multiple homes in multiple cities, but I’m not satisfied just staying where I’m comfortable. I want to keep creating,” said Tom, about his jet-setter lifestyle.

How Tom from Myspace got into photography was the result of a trip to Burning Man, he said when I recently interviewed him.

“I wasn’t taking photography all that seriously, I just wanted to document a wild scene. But when I loaded the photos onto my computer, I was hooked. I knew I wanted to capture more scenes around the world.”

Well, he seems to be succeeding. Tom also has quite the eye for color grading. His unique style looks like something out of The Great Gatsby.

In addition to his worldly travels, Tom also does giveaways and contests on his social media profiles, inviting Followers to come join him in unique locations.

If this isn’t the wanderlust sort of lifestyle that makes you jealous, I don’t know what is. Not a bad way to spend retirement, wouldn’t you say? Follow Tom on Facebook and Instagram to stay current with his adventures.